Conscious of the fragility and the deterioration of the shoreline in several areas, the Association du lac Mercier has always been focused on the protection of the environment, and numerous initiatives were undertaken to protect the shoreline. 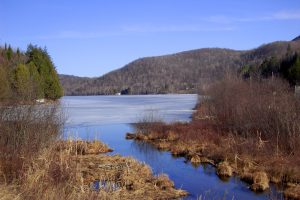 The Association has, for some time, undertaken many efforts to improve the condition of the shore:

-The established facts are worrisome : 25% of the shoreline is not natural, which is the highest rate in the Province.

-also, the lake is classified “vulnerable” because 52% of the shoreline is degraded.

-Requests to the city and the MRC to re-forest the shoreline of Lac Mercier along the abandoned railway track (since 2004).

-Participation in the MRC program to re-vegetate the shoreline along the Linear Park.

-Participation with the MRC program to evaluate the forestry resources along the Linear Park, in order to limit the problems of erosion along the abandoned railway line (since 2006).

-Hereunder is a summary of the “Service de l’environnement”, city of Mont-Tremblant, in the study of Lac Mercier 2007 report: “Programme triennal de suivi des lacs”,  2007 ,

…The city, lakeside residents and our association will implement a program to control external contaminants

The city and the MRC developed an action plan for lac Mercier in 2007 (Laniel,  2007), which would outline the ambitious measures required to protect and improve the ecosystem of the lake

Re-forest the shoreline especially along the linear park

Study rain water overflow into the lake from the village sector

Regular monitoring of the blue algae and milfoil blooms. 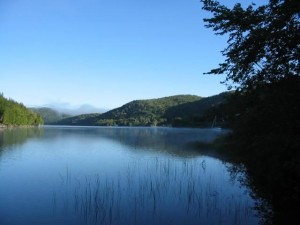 Regeneration of the shoreline

The Association du lac Mercier is aware of the importance of the problem of erosion around the lake, and the need to improve the quality of shore.

During the summer of 2010, the town of Mont-Tremblant has inspected the shore  and make recommendations so that each owner complies with the new regulations on the shoreline, adopted in January 2009 (Regulation 2008-102).

Municipal regulations on protection of the shoreline (FR)

Since Summer 2012, there has been a remarkable re-growth of vegetation along the shoreline.

Efforts at reforestation are quite visible on most lakefront properties.

According to the Quebec Court of appeal, municipalities can oblige landowners to restore the shoreline to it’s natural state.

May 2017: In collaboration with AGIR  pour la Diable, members of l’Association du lac Mercier were offered small trees for planting at no cost.  More than 150 small trees have been distributed.

Back to   Residents get involved in an Association